How old are you in MomYears? (or: how I became the mother of 2.45 elephants)

OK, so for some reason a long time ago someone decided that there were 7 dog years in a human year. So by the time your dog reaches one human year old, he’s really 7 dog years old. It makes sense, dogs reach puberty earlier than humans and if a dog lives to be 18 it’s just as much of a treat as a human who makes it to 126. A year in a child’s life is a much bigger deal than a year in the life of an adult (we’re talking humans now). It’s not that a human year isn’t long enough, it’s just that SO MUCH HAPPENS in a child’s life that when you have more than one kid, I’m pretty sure you deserve to count each one of their years as your own.
END_OF_DOCUMENT_TOKEN_TO_BE_REPLACED

All my life I’ve felt lucky.  Maybe it’s just a matter of being in the right place at the right time, maybe it’s a matter of choosing to see how things COULD have worked out alongside how they actually did work out.

There’s something anxious and unsettling about imagining all the ways things can go wrong, but looking back at all the ways things have gone right always reminds me of just how lucky I am.  I’ve got the support of friends and family, I’ve got healthy happy kids and in spite of having no real education or work background (other than for myself), I’ve got a job that I love running an amazing company that makes my corner of the world a better place. I’m incredibly lucky.
END_OF_DOCUMENT_TOKEN_TO_BE_REPLACED 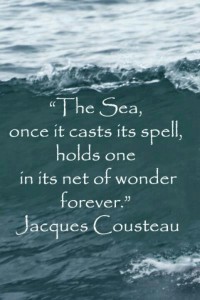 My daughters’ recently-rekindled passion for the sea and all creatures in it has sent us reeling toward more oceanic experiences lately.  The staff at the aquarium know us by name and my 10 yr old is tracking the time it will take for her to reach the age of volunteering. We’re looking into diving classes, but they’re super expensive and probably not in the budget any time soon.  In the meantime, we’re getting our kicks at low tide.

We live ten minutes from Richmond Beach Saltwater Park, they have free parking and a play structure and plenty of driftwood for building impromptu structures, a fair amount of sand for your picnic blanket and families of sea lions that play in the water and sometimes come on shore.  We especially like going during low tide, so the kids can check out the sea creatures. They lift up rocks, squealing when the crabs scoot to safety, count the barnacles on everything, feel the silky smooth skin of the anemones (and apologize when they scare the water out of them), marvel at all the different types of seaweed and listen to the birds squawking.
END_OF_DOCUMENT_TOKEN_TO_BE_REPLACED

The Best Thing Moms Can Do for the Planet

After the EG Conference, I was so eager to get home and share some of the presentations with my kids.  My 10 yr old is REALLY into animals and also really into submarines. She’s the kid who finds her bliss at the aquarium and at the zoo.

When she was 3, we were having a conversation in the car about how the season was changing; winter was over and spring was coming. I heard her sobbing in the backseat and asked if she was OK.  Her face was red and blotchy and covered in tears and she said “winter is over and I didn’t see a single penguin.”  It was heartbreaking and adorable.
END_OF_DOCUMENT_TOKEN_TO_BE_REPLACED

If I ever get married again﻿

When I was in my early 20’s I was spared the whole push-to-marriage that so many young adults deal with because I was already married when I was 19. (I was also spared the push-to-college but that’s a rant for a different day).

I celebrated my 3 year divorceaversary last month and well- meaning family and friends keep asking me if I’ve thought about getting married again. The short answer is “no.” The longer answer is “maybe, but not right now.”

I’ve heard all sorts of bullshit rationale for why I should revisit the whole death-do-you-part lifestyle and I’m not buying any of it.
END_OF_DOCUMENT_TOKEN_TO_BE_REPLACED

As a mom, I can tell you that every single day of my life is spent “for the kids”

There’s little time left for me and even on the 4 nights a month that they’re with their dad I spend time doing laundry and dishes and living for my kids.

My youngest is 8 now, and if you happen to be a mom of smaller kids, I tip my hat to you (It’s a Girl Scout baseball cap and not something stylish, just so you know).

I clearly remember waking up to the sound of a screaming infant, sipping coffee while monitoring the busy-bee activities of an active toddler and soothing myself to the promises of more experienced moms who told me “It will get easier”
END_OF_DOCUMENT_TOKEN_TO_BE_REPLACED

Living On The Edge

My dad used to say “If you’re not on the edge, you’re taking up too much space.”  He meant that it was important to be up-to-date on news, technology and innovation, but that’s not the “living on the edge” that I’m talking about.  I’m talking about literally standing at the edge of a cliff in a windstorm with waves crashing beneath my feet a thousand miles below me.

Being a single mom is hard, especially in my head.  I commute a total of 16 miles a day, it can take anywhere from 40-90 minutes a day.  Those two sentences seem unrelated, unless you’re me in the car white-knuckling for 40-90 minutes a day afraid that at any moment a car is going to swerve out of nowhere and kill me, leaving my kids without a mom.
END_OF_DOCUMENT_TOKEN_TO_BE_REPLACED

It’s been said that “small minds discuss people, average minds discuss events and great minds discuss ideas” (though apparently there’s some dispute about who actually said it and which exact words they used, though it’s most often attributed to Eleanor Roosevelt).

I’m not a great mind, I’m fascinated by people and super inspired by their stories, whether they’re stories of success or stories of failure. Recovering from a narcissistic relationship is weird. Some of the personal work I have to do is examining my own mindset and discovering ways that I allow my “light to be dimmed” by trying to live up to the expectations of other people, or my own self-talk.  It’s really weird.  Because in order to be in a relationship like that you have to detach; it doesn’t matter what you think or how you feel about anything, it only matters how you’re perceived in light of the abuser’s insecurities.  If that sounds a bit like trying to balance a wobbly gyroscope by firing at it with a slingshot full of broken rubber bands, then you’re understanding the situation really well.  It’s as hopeless as it sounds.
END_OF_DOCUMENT_TOKEN_TO_BE_REPLACED

OK, so the illustration process for my children’s books is taking a lot longer than I anticipated. Originally, my goal was to be finished by the time my oldest daughter’s wedding rolled around and that’s in 12 days, so that might not actually happen. But in the meantime, I have published a few other, less labor-intensive books. The experiences I’ve had working with the publishing platform have been important and the income from these will definitely help my life situation, but they’re not children’s books, they’re more like children’s book diversions. Either way… enjoy 🙂

This book is a personal writing journal, it has empowering divorce-positive quotes on the left-side pages and lined paper interspersed throughout, for personal journaling.  My divorce was a very positive thing in my life and I got sick of seeing so many references to divorce being a bad thing, I just wanted to create a resource for women who were determined to see it as a stepping stone toward a life of freedom and positive personal growth. I have a lot more of these inspirational-quote-driven journals that I’ll be publishing via the Luckiest Girl Publishing website, so you might want to head over there and check it out.
END_OF_DOCUMENT_TOKEN_TO_BE_REPLACED

The experiences a child has with their parents become the building blocks for all future relationships. Sometimes this is a good thing, sometimes it’s not. One of my favorite quotes is by Pam Leo and it states “Let’s raise children who don’t have to recover from their childhoods.”

Anyway, here’s the deal.  We’ve recently become entangled with a family who has the most delightful 17 yr old son.  Like many 17 yr olds he’s craving some independence.  He’s the only child of a divorced couple. Mom has remarried, so the three adults work together to be his parent.  Only, he’s growing up now and the “techniques” they used in the past aren’t “working” and they’re super stressed about it.
END_OF_DOCUMENT_TOKEN_TO_BE_REPLACED