As a mom, I can tell you that every single day of my life is spent “for the kids”

There’s little time left for me and even on the 4 nights a month that they’re with their dad I spend time doing laundry and dishes and living for my kids.

My youngest is 8 now, and if you happen to be a mom of smaller kids, I tip my hat to you (It’s a Girl Scout baseball cap and not something stylish, just so you know).

I clearly remember waking up to the sound of a screaming infant, sipping coffee while monitoring the busy-bee activities of an active toddler and soothing myself to the promises of more experienced moms who told me “It will get easier”

That “me time” that you’re supposed to seize when you have an infant is a joke. There’s time for that later, trust me.  All of this to say that for a while you’re going to feel like a doormat. And that’s just the fact of the matter.  I suppose there are women who have managed to find the one-in-a-million spouse that actually does chip in with 50% of the childcare, allowing her 15 nights of uninterrupted sleep a month, half as many diapers to change, one snotty nostril to wipe clean and things like that.  But kids grow up so fast. I can’t imagine how sad life would be if I had enjoyed half as many bedtime stories, half as many high-chair meals or half as many “Hey mom, watch this.”

But instead of doodling about the awesome feeling of being someone’s superstar, about the power mothers have in this world to shape a brighter future, about the force of nature that allows us to carry a child for 9 months and then birth it into this world, Google went with the doormat thing.

Doormats are good.  You wipe your muddy feet on them before you come into the house. Doormats catch all the shit before it ruins your carpeting or scratches your hardwood.  The world needs doormats.

But the world doesn’t need mothers who FEEL like doormats.  Especially on Mother’s day.  Apparently Google thinks that the best visual representation of Mother’s day is a drawing of Dad and kid shoes on a doormat:

Historically, Google’s Father’s Day Doodles tell an entirely different story.  Are they saying Dads are lazy? Or that dads need to rest?  I get that some men work hard and probably do need a break, but this hasn’t been my experience so personally I get a bit peeved when I see Mother’s Day represented as a doormat and Father’s Day represented by leisurely naps. In my experience (and one reason why I’m divorced) dads seem to do a better job than moms do of “meeting their personal needs” and taking naps and being lazy as often as possible. If you happen to be coparenting with a man who works as hard as you do, hold onto him. 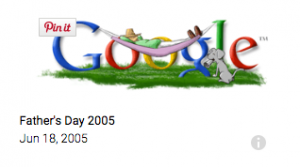 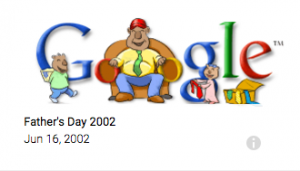 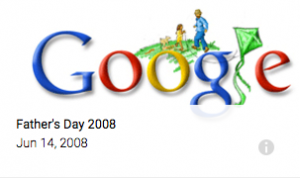 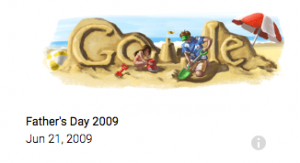 That’s all great and sweet but the fact is that moms do those things EVERY FUCKING DAY. Every single day of motherhood is more like the father’s day doodles, but doormat is what they went with.  Doormat.

Just to be fair, they have selected fun things for Mother’s Day in the past, but since I’m complaining it didn’t seem wise to start with the two fun Mother’s Day doodles (both of which were from 2014, so they count as one)… 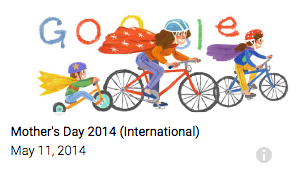 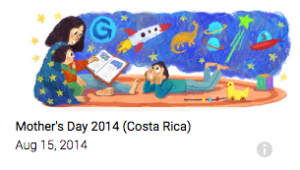 I’m half inclined to gin up my own doodle, but I suspect there are a few annoyed moms with much better art skills than I have who are doing just that right now.

And in the interest of telling-the-whole-story, their Father’s Day doodle is also a doormat this year (in Germany, at least)