Doesn’t that usually refer to money? Actually, it’s what Evie is calling the statues of US Presidents in Rapid City, South Dakota. We stopped off in Rapid City to get some groceries and visit the bank before heading out to Mt Rushmore to see more Presidents. Rapid City is less than 20 miles from Mt Rushmore, and as we drove through the streets of downtown, we noticed that every corner had a statue of a President. George W Bush’s statue was placed in October of 2010, so I’m guessing they’re hard at work on Obama’s right now. Each time we passed one, we got more excited about the possibility of hopping out to take pictures with the President statues. The project is called City of Presidents in Rapid City.

Finding parking downtown with the motorhome wasn’t easy at first. I spotted the empty lot of the Trinity Lutheran Church and made a few phone calls. Pastor Wilbur Holtz was super sweet on the phone and let us park there for a few hours. We were able to relax and eat a nice lunch before heading out for our walk. While we were parked, we met a very nice lady named Cynthia. She was setting something up at the church. It was so cute to hear the kids introducing themselves. Cynthia had a beautiful motorcycle and we were surprised to learn that she once lived in Yakima and in Selah. Imagine driving 1000 miles from home and the first person we meet ends up having ties to our area. What a small world.

Some of the positions they were in made it very easy to think of fun poses. My mind naturally kept thinking of dirty poses, so you won’t see many pictures of me here. I had more fun taking the pictures. If I ever go back without the kids, maybe I’ll get silly and snap a few. Nixon… you’re on that list. 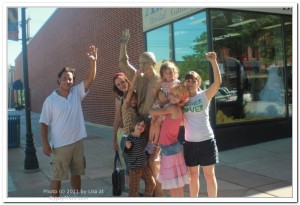 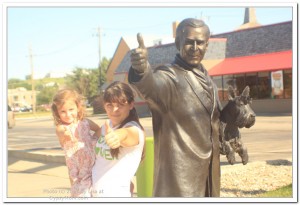 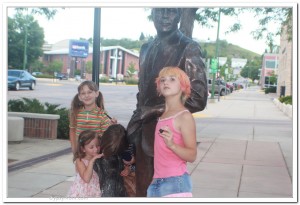 The kids were more interested in the President's dogs 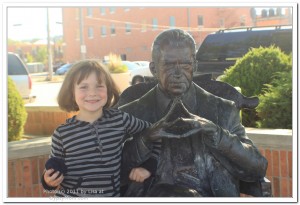 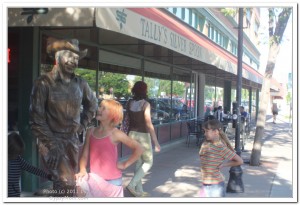 Gabriella walking with a President 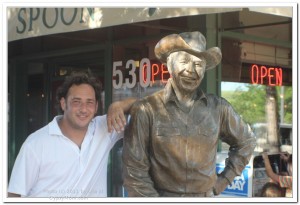